The Jersey Race Club dates back to 1832, when the club was first formed for a two day meeting on the sands at St Aubin. Racing has continued in one form or another until today, with the exception of the two world war periods.

In 1836 racing moved to Greve d’Azette, where the first King’s cup was contested, having been given to the island by HRH William.  The venue changed once again in 1843 to Gorey Common (the present day Royal Jersey Golf Course) and continued there until 1906. 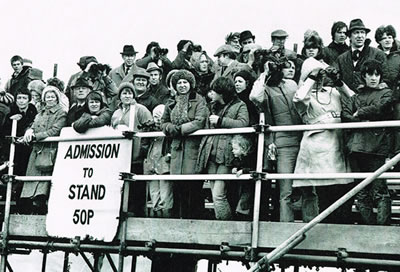 The last quarter of the nineteenth century was the heyday of Jersey racing with the Jersey Race Club at Gorey, Trinity races at Jardin d’Olivet and the St Ouen’s races at Les Landes, to the west of the present racecourse.  In addition, in 1898, a new course was built at Quennevais, St Brelade.

In 1894, the Channel Island Racing & Hunt Club was formed, with the idea of pulling together all these different activities. The CIRHC issued a single set of rules to cover racing in Jersey and Guernsey. General Pipon of Noirmont Manor was the first Senior Steward.

In 1906 all racing was concentrated at Les Quennevais, where it continued until 1961, when the present racecourse was built at Les Landes, La Route de Grosnez, St Ouen.